The EO4SD-Urban in Phase 1 of its implementation (2016-2017) had the pleasure to collaborate with two dynamic and interesting projects from the World Bank (WB) based in Africa. In particular, in both activities geo-spatial products from the EO4SD-Urban Portfolio have been employed for improving the understanding of key urban development issues.

Most developing countries face challenges with land valuation of taxable properties since data is often incomplete and/or outdated, which then has a critical effect on the revenue collected by the Governments. In this framework, the first project made use of both building footprint and height information derived from Pleiades satellite stereo imagery to support the assessment of property valuation for tax purposes. Specifically, the two products have been used in combination with data on land prices as input for valuation modelling in Kigali (Rwanda). The results of the study undertaken by Daniel Ali, Klaus Deininger and Michael Wild have been presented in the WB Policy Research Working Paper Using Satellite Imagery to Revolutionize Creation of Tax Maps and Local Revenue Collection. The authors acknowledged ESA and EO4SD-Urban project for their support and assessed the high potential of EO-based products for analyzing critical urban development issues in African countries.

The second project was conducted in Tanzania and aimed at investigating the impact of urban planning on spatial development. Here, as rapid and often unplanned settlement growth occurred in Tanzanian secondary cities, one of the study objectives was to address the potential of geo-spatial data to support the Government with improved planning and decision making. In such context, EO4SD-Urban provided the Land Use/Land Cover, Road Networks, Green Areas and Informal Settlements products for the cities of Arusha, Dodoma and Kigoma, which were used to assess the existing Master Plans and analyze the urbanization processes occurred in the last decade. Furthermore, spatial metrics (e.g., fragmentation, leapfrog growth) have also been derived from the settlement extent maps produced by DLR. All the products have been effectively integrated into the study methods and interesting analyses are presented in the WB Report Urban Planning Study for Tanzania – Impact and Effectiveness of Urban Planning on City Spatial Development. The EO4SD-Urban consortium had an excellent cooperation with the Project Leader Chyi Yun Huang and the team of Mary Grace W. Lugakingira, Isabel D. Cantada and Dr. Ally Namangaya of Ardhi University.

These two collaborations testify the excellent cooperation between WB, ESA and European EO Service Providers, and their joint efforts to champion the use of EO-based products for supporting improved urban planning in development countries. Moreover, they provide a solid basis for future activities aimed at a wider adoption of EO data by international programmes. 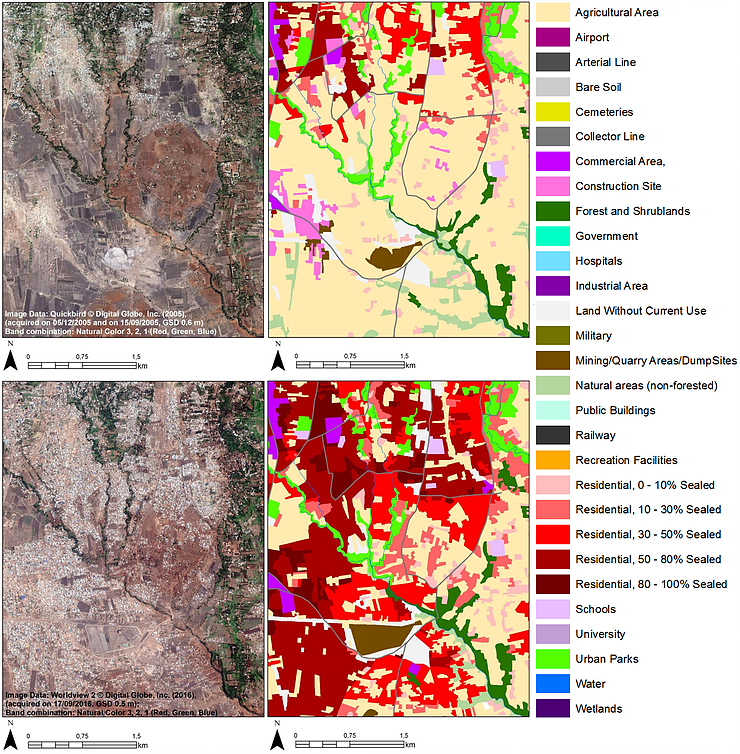 Arusha (Tanzania) – Land Use/Land Cover classification of an area located south of the city center in 2005 (above) and 2015 (below) [Classifications are based on 2005 Quickbird imagery and 2015 WorldView-2 imagery, respectively].