The EO4SD-Urban project supported the World Bank technical assistance project Urban Planning Study – Impact & Effectiveness of Urban Planning on City Spatial Development in Tanzania. The study is linked to the larger World Bank project Tanzania Strategic Cities Project (TSCP), which supports the cities of Tanga, Arusha, Mwanza, Kigoma, Dodoma, Mbeya and Mtwara. These cities are of strategic importance as they are within the top ten most populous cities in Tanzania with high population growth rates. In the context of the current EO4SD-Urban project, all seven cities were provided with mapping products on core urban land use and land cover, peri-urban land cover, urban extent, informal settlements, urban green areas, transport infrastructure and population distribution as well as with additional basic and advanced spatial analytics.

The satellite-based products were used by the bank team to analyse the higher objective of the Urban Planning Study, which is “to enhance the urban development and inform policies and development strategies of cities in Tanzania through gaining further insights on urban planning system and development processes and the effectiveness of master and detailed urban plans.”

Find more details on the findings of the study in the World Bank publication Translating Plans to Development: Impact and Effectiveness of Urban Planning in Tanzania Secondary Cities and in the related World Bank blog entry Challenges to implementing urban master plans – what are we missing?. 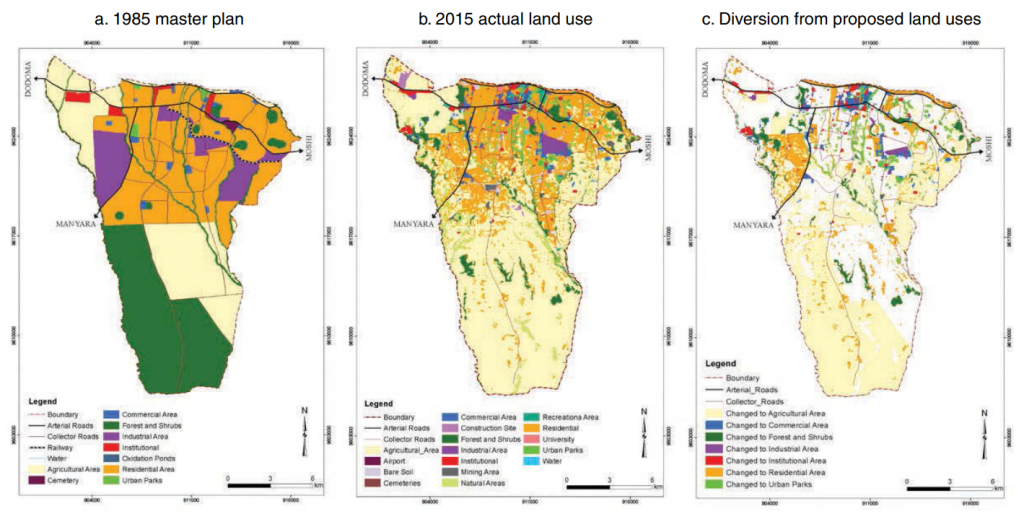 Satellite-based land use mapping supporting the assessment of the effectiveness of urban master plans. Left: Existing 1985 master plan of Arusha, Tanzania; Centre: land use classification for 2015 produced in the EO4SD-Urban project; Right: the diversion of the actual land use form the proposed land use.